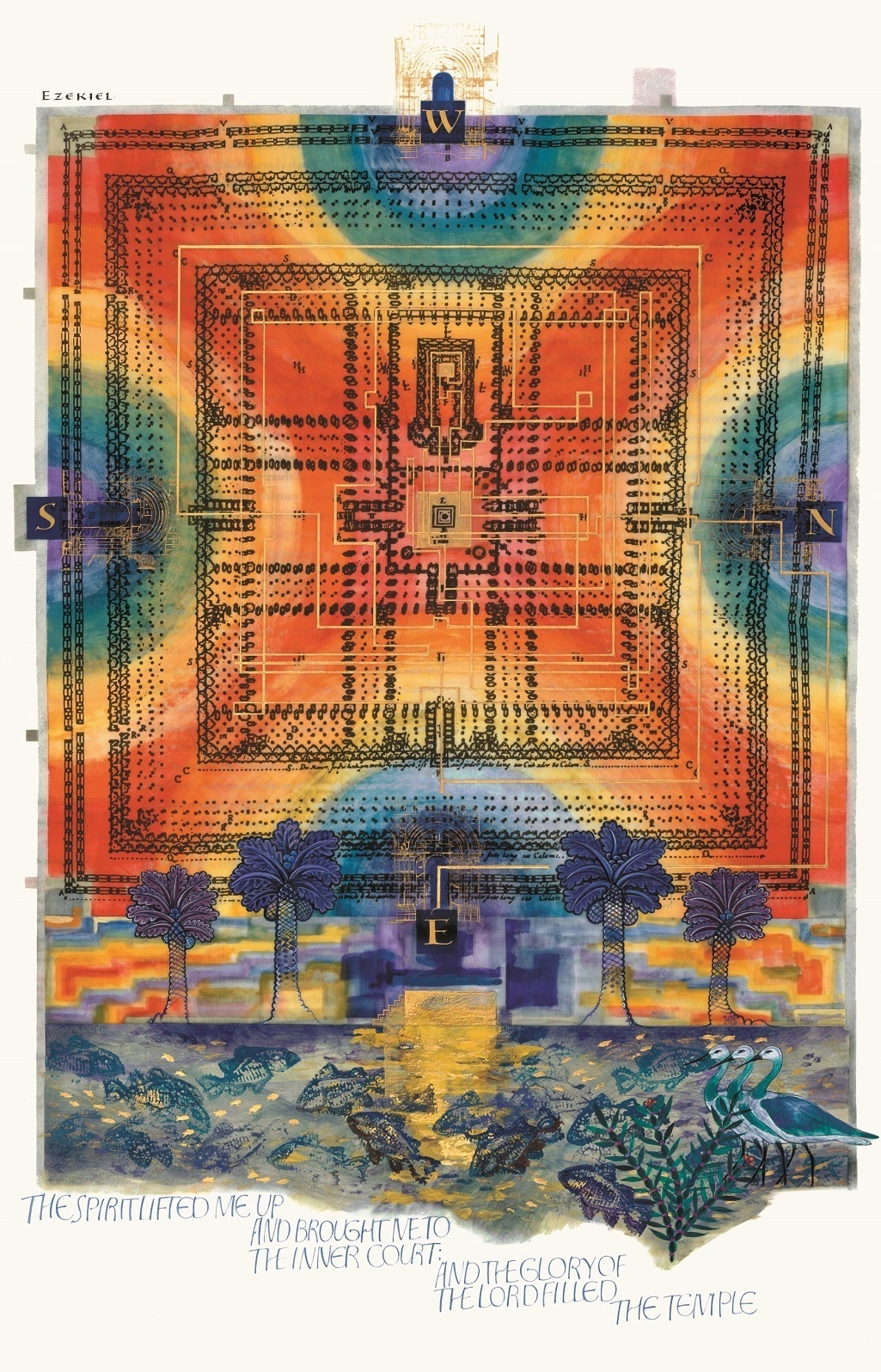 Vision of the New Temple, Donald Jackson, Copyright 2005, The Saint John’s Bible, Order of Saint Benedict, Collegeville, Minnesota.  Scripture quotations are from the New Revised Standard Version of the Bible, Catholic Edition, © 1993, 1989 National Council of the Churches of Christ in the Unites States of America. Used by permission. All rights reserved.

Timeline — In 1997, Donald Jackson proposed the idea to Br. Dietrich Reinhart, O.S.B., President of Saint John’s University. After a year of deliberation, the monks approved the project in 1998. The first words were written on Ash Wednesday, 2000, and the final word, “Amen,” penned on May 9, 2011.

Human Resources — 11 members of the Committee on Illumination and Text advised 15 scribes and illuminators. Each of the 1,165 pages took 7-13 hours to execute.

Cost — Initial estimates for the project were $3 million.  Ultimately, it would cost the abbey $8 million!  The names of all donors are inscribed in a hand-illuminated “Book of Honor” held at Saint John’s University.  Each of the 299 Heritage Editions costs roughly $165,000.

Vellum —  Vellum for the project came from Cowley’s in Wales.

Marginalia —  In addition to the illuminations and special text treatments, the marginalia of The Saint John’s Bible also contains small crosses marking verses quoted in the Rule of St. Benedict, details alluding to major donors funding each volume, small animals inserting forgotten lines into the text, and Chris Tomlin’s nature marginalia.  [For examples of these latter two, see Susan Sink, The Art of The Saint John’s Bible: The Complete Reader’s Guide, 339-342.]

Script — The calligraphic script was specially designed for The Saint John’s Bible by Donald Jackson. Jackson sought to design a script that would have “Speed – flexibility – juice.”  Letters are written in lamp black ink from 19th century Chinese stick inks made from carbon.

Script size —The small letters are about two millimeters tall. The height of the script is directly proportionate to the size of the quill.

Columns — Each page has two 4 ¾” columns of script. Columns are justified on the left and the right. There are 54 lines per column, and an average of 10.5 words per line.