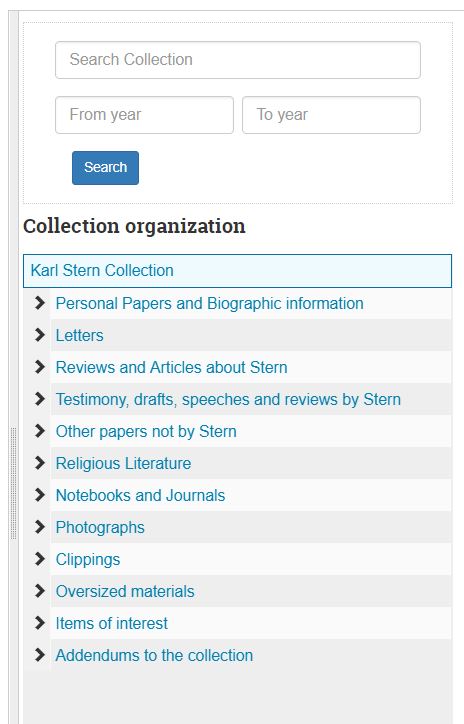 On the right-hand side of the screen, use the menu to browse through the Karl Stern Collection, or to search the Collection by keyword or by year-range.

To download a PDF of the Finding Aid of our Karl Stern Collection, please click the link below.

Scope and Contents of Collection

The Stern Collection consists of eleven series: personal papers and biographic information, letters, reviews and articles by Stern, testimony, drafts, speeches and reviews by Stern, other papers not by Stern, religious literature, notebooks and journals, photographs, clippings, oversized materials, and items of interest.

Letters: Letters are organized by language (English, French, German) and the sender’s name, last name first. Unclear names are at the end of each subseries. This series includes letters from prominent psychologists, Catholic intellectuals, politicians, publishers, and many readers of Stern’s books. Correspondence connected to a specific document or conference, however, remains with the associated document in the appropriate subseries; the file entry will note the correspondence.

Reviews and Articles about Stern: This series consists of reviews of Stern’s work and biographical articles. See clippings, subseries 9, as well.

Testimony, drafts, speeches and reviews by Stern: This series includes lectures, speeches, scripts, and testimony for Canadian Parliament hearings and obscenity cases. Notes and drafts are also included in this series.

Other papers not by Stern: This series holds papers collected by stern on religion and psychology, conference materials, and some correspondence with organizations such as the Canadian Arts Council.

Notebooks and Journals: This series contains Stern’s journals, and notebooks by Lisolotte and Michael Stern.

Photographs: This series holds photographs of Stern, his family, and work pictures. Many have not been identified.

Clippings: This series contains articles, about, by, or saved by, Karl Stern. Many were collected by professional clipping services for his publishers.

Oversized materials: Materials larger than 8.5” by 14” include: Honorific Parchment from Government of Quebec, oversized birthday card, a framed montage of pictures, and feature articles on Stern or organizations he was affiliated with.