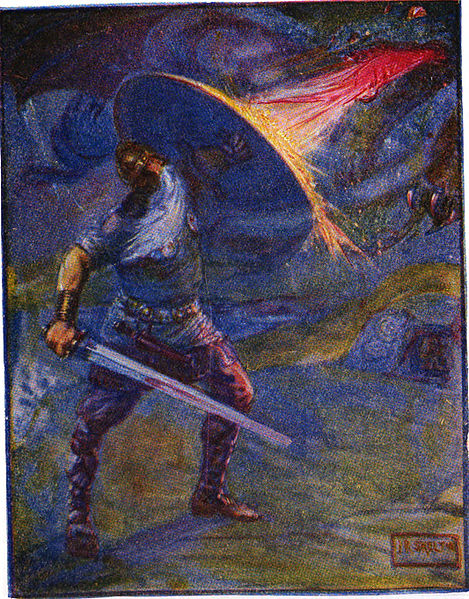 Keep in mind this handy rule of thumb:

It is never wrong to cite something. If you ever find yourself in a situation where you are not sure if you need to cite particular information (is it common knowledge or not?), citie it.  That is the safest thing to do.

On a Works Cited Page

Beowulf Published as a Separate Book (Two examples are given)

Beowulf Published in an Anthology

While the citation directly above gives the correct arrangement of citation elements, be sure to indent the second line of the citation one half inch from the left margin on your Works Cited page.

(In the citation directly above, the title Beowulf would be placed in italics since it is a long poem usually published as a book by itself. Anonymous books, since authors’ names are not known, are alphabetized on the Works Cited page under the first word of the book title, so Beowulf would be alphabetized under “B.”)

In-text citations in MLA 8th edition are done using parenthetical references. Because Beowulf is an anonymous poem, the first element of the in-text citation (as in the citation on the Works Cited page) will be the title of the work, in italics. What comes next depends on how the work is presented in the actual version you are using.

If the work--generally you will be using a translation-- is presented without section numbers, as in the original Anglo-Saxon poem, where the work is one long continuous text with spaces between the sections, and no line numbers are given, you would use a page number (or numbers) following the title of the work (Beowulf 41).

Citing Your Sources in MLA Format

When we speak of citing, two things are meant. The first is citing within the text of a paper, either by using parenthetical references, or footnotes. The second is providing complete bibliographic information for your sources in a bibliography (also known as a Works Cited page).

The Duquesne University Writing Center has created very helpful guides to assist you with citing in-text and in bibliographies in MLA style. The current edition is the 8th edition, but documentation for the earlier edition is also provided. PDFs of these documents are available below.

Click the link below to see a document describing how to cite articles from Literature Resource Center and LION in MLA format (8th edition).

Click the link below to see how to cite a book from a library database in MLA format (8th edition).

In writing papers, you will often want to use exact quotes, especially when you cannot improve upon an author's original way of stating an idea. In those instances, of course, you should use the exact quotation, correctly citing it as the work of someone else.

But a paper cannot be written by simply stringing together exact quotations from a number of authors. More often than not, in writing you will do more stating the ideas of others in your own words, that is you will paraphase or summarize those ideas of other people.

Paraphrases and summaries of other people's ideas must also be cited, or you will be charged with plarigaism. Plagiarism is not just the using of other people's exact words without giving them credit, but also using their uniques ideas without citing them as the source. Because correct paraphrasing and summarizing can often be confusing to students, the Duquesne University Writing Center has created a handout on these topics. To see a PDF of it, click on the link below.

Surprisingly, not everything has to be cited. For example, a statement like "George Washington is known as the 'Father of His Country'" would not need to be cited because this is a general idea in the culture that most people are aware of. These sorts of information are called "common knowledge."

Another way to express this is, if three to five reference works all say the same thing about a topic, then that idea is common knowledge. It is not the intellectual property of any one individual, and, therefore, does not need to be cited. If you ever have questions on whether a statement is common knowledge, Ask a Librarian, talk to your professor, or contact the Duquesne University Writing Center.