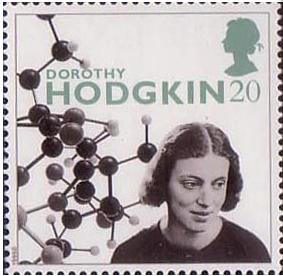 Dorothy Hodgkin (1910-1994) received the Nobel Prize in Chemistry in 1964 for her work in X-ray crystallography, which she used to find the structure of penicillin, insulin, and vitamin B12. She was one of the first to use X-ray crystallography on organic molecules. Hodgkin received other honors as well: she was elected to the Royal Society in 1947 and the Order of Merit in 1965. Additionally, Hodgkin was chair of the Pugwash Conference from 1976-88. The Pugwash Conference is a group that works to reduce harm from scientific discoveries, particularly nuclear disarmament.