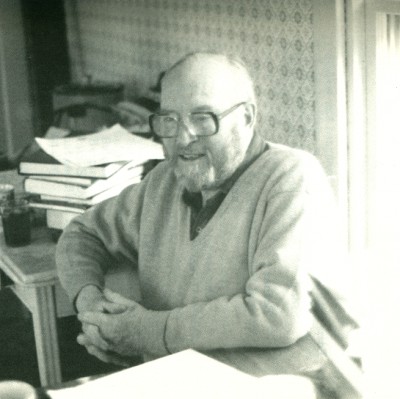 James F, Clarke was a twentieth-century academic, government analyst during World War II and the Cold War, and a cultural ambassador to Eastern Europe. His parents were Missionaries in Eastern Europe, who helped found the American College in Bulgaria. James F. Clarke was born on June 5, 1906 in Monastir, now known as Bitolj, in the former Yugoslavian province of Macedonia. He grew up in Switzerland, England, and various Balkan states, but returned to the United States in 1920, attending high school in Massachusetts and graduating from Amherst College in 1928. While working on his dissertation at Harvard, he married Esther Nichols.  He briefly worked at the University of Idaho from 1939-1942.

His strong background in the politics, languages, and cultures of Eastern Europe sustained his career in intelligence for the next decade.   During the war he served as a research analyst and policy advisor, eventually becoming Deputy Chief for the Psychological Warfare Branch at the Allied Forces Headquarters in Africa.  In 1945 He began working for Voice of America (which countered Nazi propaganda at the time) as the Acting Chief of the Central and South East European Division. In early 1946 he was assigned to Salonika as part of the Allied mission to observe the Greek elections (AMFOGE).Clarke went on to work for the State Department in the Office of Intelligence Research.

He returned to his academic career in 1951, working at Indiana University, but continued to consult for the State Department until he accepted a faculty position at the University of Pittsburgh in 1956, teaching Eastern European, Turkish and Byzantine history. In 1958 he also consulted for the A.I.R. think tank, based in Lexington Massachusetts. Although he claimed that he acquired a dislike for the communist witch hunts of the McCarthy era in the 1950s, his anti-communism stoked controversy at the University of Pittsburgh, notably in the “Colodny Case.”

His later work focused more on ethnic studies, particularly those involving Eastern Europe, and he amassed a large collection of books from Eastern Europe.  He continued to teach at the University of Pittsburgh until 1976. He was 76 years old when he died of cancer on December, 5, 1982.

Dr. Clarke was an expert on the history of Eastern Europe and a former employee of the State Department and Professor at the University of Pittsburgh. His collection includes thousands of books, newspapers, documents and artifacts related to his work and studies in the mid-twentieth century.

For additional information on the Dr. James Clarke Collection or to schedule an appointment, please contact: