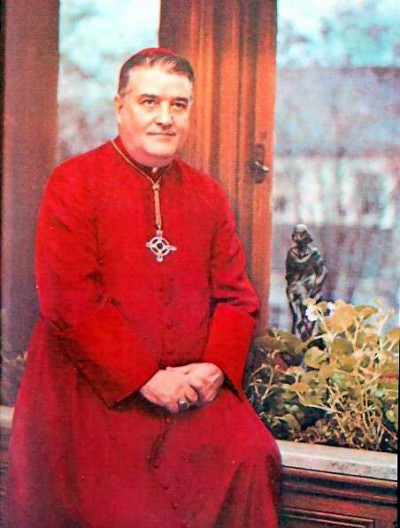 An important aspect of the collection is the abundance of material covering Vatican II and various synods in its aftermath, as recent as 1977. These include periodical articles, working papers with notes by Cardinal Wright, and copies of L'Osservatore Romano for the years 1962-1964 - three of the four council sessions.

In a broader sense, and given Cardinal Wright's local and international stature, the collection is a treasure-trove for scholars interested in a chapter in modern Church history or simply the Cardinal's life.

The collection houses about 3,000 books and 550 periodicals. Cardinal Wright was a noted Joan of Arc scholar and he owned the biggest collection on St. Joan outside of France. In 1975, he dedicated these to the Boston Public Library. As for the remaining items, the Pittsburgh Catholic Diocese transferred them to Duquesne in 1980. However, the collection does include 77 copies of a volume entitled "Letters of Joan of Arc" by Blare Quintal and Daniel Rankin, published in 1969.

In the collection can be found 70 linear feet of the Cardinal's writings, ranging from the notes to his doctoral thesis to his daily itineraries. Included are discourses and homilies - in English, Italian, French and Spanish. These papers are useful tools for scholars as they cover subjects ranging from spirituality to the role of laity and Church-State relations. In addition there are 35 day-books in all covering the years 1946-1979 and ten yearbooks that scan his days as Cardinal from 1969 to 1978.

Cardinal Wright had a local connection as the eighth Bishop of Pittsburgh from 1959 to 1969. He came to Pennsylvania after a position as the first Bishop of Worcester, Massachusetts, then a newly-created diocese. Between 1969 and 1979, he assumed worldwide significance in Rome as Cardinal and as Prefect of the Sacred Congregation for Clergy and Pastoral Work. Simply put, he was heading the 400,000 or so Roman Catholic clergy in the world at that time. Cardinal Wright was also one of the 2300 bishops who attended Vatican II, the ecumenical self-examination initiated by Pope John XXIII from 1962 to 1965.