According to iconographer Solrunn Nes, "the icon painter's repertoire consists of the complete gallery of persons in the New and Old Testaments, as well as holy men and women in Church tradition. A motif may incorporate one person, a group, an event or the progress of an event." Certain motifs have been more frequently depicted than others. Of those of Christ, "Christ Pantocrator," "Christ Emmanuel," and "The Icon Not Created by Human Hands" are the most reproduced. Most frequently used motifs of the Virgin Mary are "Our Lady of the Sign," "The Mother of God, Hodegetria," and "The Mother of God, Eloeusa." Festival icons of the major liturgical feasts of the Church year are frequent subjects. Icons of the saints and biblical events have also been popular.

All images are in the public domain. Source: Wikimedia Commons. Click on an image to enlarge it. 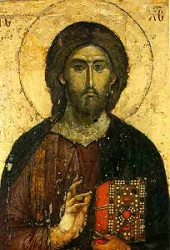 "Pantocrator" means "All-Ruler." This icon shows Christ as Creator, Savior, and Judge. He looks right at us in compassion, but demanding a response. His hand is raised in blessing. He holds the book of the Gospels, the good news of salvation for all who will receive Him. Some versions of this icon show Christ seated on a throne, underscoring that He is the almighty King of Kings and Lord of Lords. From the 13th century. Serbian.

Image Not Made With Hands 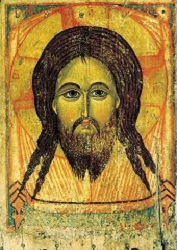 This icon, also known as the "Mandylion" shows the face of Christ miraculously reproduced on a cloth. Tradition says the cloth was sent by Jesus to the king of Edessa. The touch of the cloth healed the king of an illness. Russian icon. 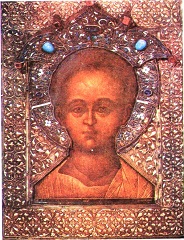 "Emmanuel" means "God with us." This icon shows Christ as a beardless youth, who, at the same time is of indeterminate age, and who has wisdom beyond his years. This refer to the event in the Gospels, when Jesus, at the age of 12, astounded the elders of Israel in the Temple with his knowledge of the things of God. Icon by Simon Ushakov, 1668, Russian.

This icon, also know as the "Hospitality of Abraham" depicts the Father, Son, and Holy Spirit as they visit the patriarch Abraham. By Andrei Rublev, it is one of the masterpieces of Russian iconography. Circa 1400.

This icon shows the baptism of Jesus in the Jordan River by John the Baptist. God the Father announces that "This is my beloved Son in whom I am well pleased." The Holy Spirit also descends to empower Jesus for His ministry. This icon depicts a theophany, an appearance of the three Persons of the Trinity to human senses. Coptic. Before the 19th century. 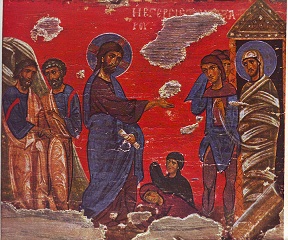 Jesus raises his friend Lazarus from the dead, showing that He is God by the power of His word over death. 12th-13th century. Greek.

Jesus, in this icon, rides triumphantly into Jerusalem, fulfilling the Old Testament prophecy that the Messiah would enter Jerusalem riding on a donkey, the beast a king rode when he came in peace. Date unknown. Ukrainian? 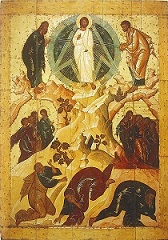 This icon depicts the New Testament event when Jesus took Peter, James and John with him up onto Mt. Tabor, where He revealed his divine glory to them and God the Father once more declared Jesus to be His Son, who was to be heard and obeyed. Moses and Elijah come to speak with Jesus about his death which would soon follow. Circa 1516. Ukrainian.

In this icon we see Jesus on the cross. Standing at the foot of the cross is his mother Mary and the Apostle john. Angels in the sky weep at the suffering and death of their Lord for the sins of mankind. The cross is planted on a mound in which we see a skull indicating this is Golgotha, the Place of the Skull, which tradition said was the mountain on which Abraham was told to sacrifice Isaac. 13th century. St. Catherine's Monastery, Mt. Sinai. 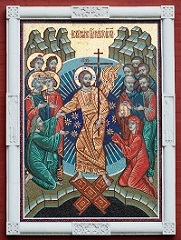 This icon depicts the resurrected Christ descending into Hell to free believers (in the persons of Adam and Eve) and lead them to Heaven. He triumphs over death and Hell through the power of his now-empty cross and his resurrection. He stands as victor on the gates of Hell, which he has burst asunder. Date unknown. Inner side of the Resurrection Gate to Red Square, Moscow. 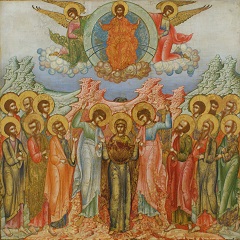 In this icon Jesus is seen ascending on the clouds to take His throne in Heaven. Mary and the Apostles witness the event and angels announce to them that Christ will come again on the clouds as they have seen Him go. 19th century.

Biblical Scenes: Daniel and the Three Youths in the Fiery Furnace 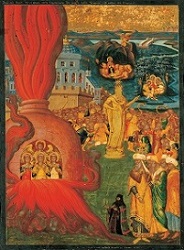 This is an example of an icon that shows most of the events of a biblical book in a single image, specifically the events of the early chapters of the book of Daniel. By Konstantinos Adrianoupolitis. Between 1725-1750. Greek.

The Mother of God, Eleusa 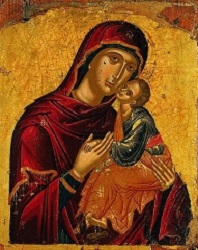 "Eleusa" is Greek for "tenderness." This icon shows the tenderness between Mary and her Son. In this way it points to the human nature of Christ. By the Circle of Andreas Ritzos, 15th century.

The Mother of God, Hodegetria 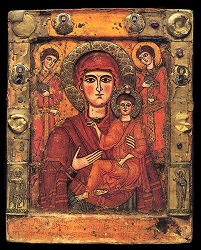 "Hodegetria" is a Greek word meaning "She who shows the way." The gesture of Mary's right hand towards her Son indicates to the viewer that Jesus is the way to salvation. In this icon Mary is flanked by archangels. 13th century. Georgian. 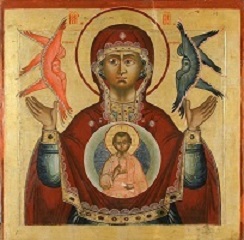 In this icon, Mary stands with her hands raised in prayer. She indicates to the viewer that her Son is Savior of the World. In front of her is a medalion of the child Jesus holding a scroll, indicating that he is the living Word of God. Mary is flanked by seraphim. 18th century. Russian

This icon depicts the announcement of the archangel Gabriel to the Virgin Mary that she had found favor with God and would bear His Son. Her response to this startling message is "Let it be to me as you have said." 14th century. Macedonian. 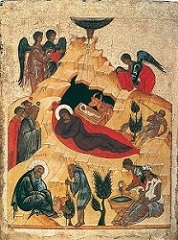 This icon shows multiple events surrounding the birth of Jesus in a single image. Circa 1475. Russian.

Presentation of Jesus at the Temple 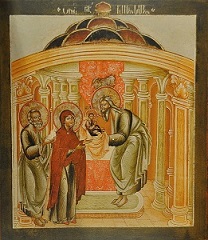 The baby Jesus is presented to God in the Jerusalem Temple. The aged Simeon takes hold of the promised Messiah and praises God. He predicts the sorrows of Mary at the death of her Son. Joseph holds two turtledoves, the sacrifice of the poor to God. 18th century. Russian? 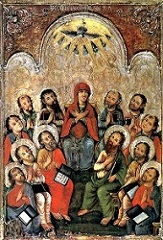 In this icon the Holy Spirit descends as tongues of fire onto the gathered Church, equipping them to go forth and spread the Gospel. 18th century.

Dormition of the Virgin 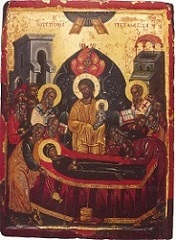 This icon depicts the death of the Virgin Mary and the receiving of her soul into Heaven (in the form of a swaddled child) by her Son.16th century. Macedonian.

A Saint: John the Forerunner

This is an example of an icon of one of the most important saints. In the Orthodox Church, John the Baptist is known as the "forerunner" because he prepared the way for the coming of Christ. This is an example of an icon that paradoxically shows two moments in a person's life: John as a living man, but he is holding his head which he will lose at Herod's order. Before the 17th century. Macedonian.

A Saint: St. Luke the Evangelist 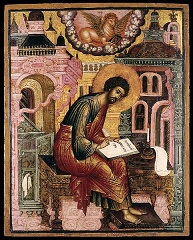 Another example of an icon of a saint, this depicts St. Luke writing his Gospel. His symbol, the winged ox, can be seen above him. 17th century. Russian. 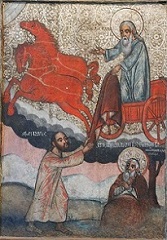 This icon depicts the scene from the Old Testament when the prophet Elijah, while still alive, was carried to heaven in a fiery chariot. His protege, the prophet Elisha, grasps hold of his mentor's cloak, by means of which God will work miracles through him. 17th century. Polish.

Synaxis of the Archangel Michael and Other Bodiless Powers 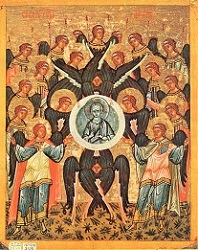 This icon commemorates the festival, the Synaxis of the Archangel Michael and the Other Bodliess Powers, and depicts the angels, archangels and seraphim, who worship and serve their Lord and God, Jesus Christ, indicated by the image in the medallion in the center. Christ is depicted there as Christ Emmanuel. End of 15th century. Russian.