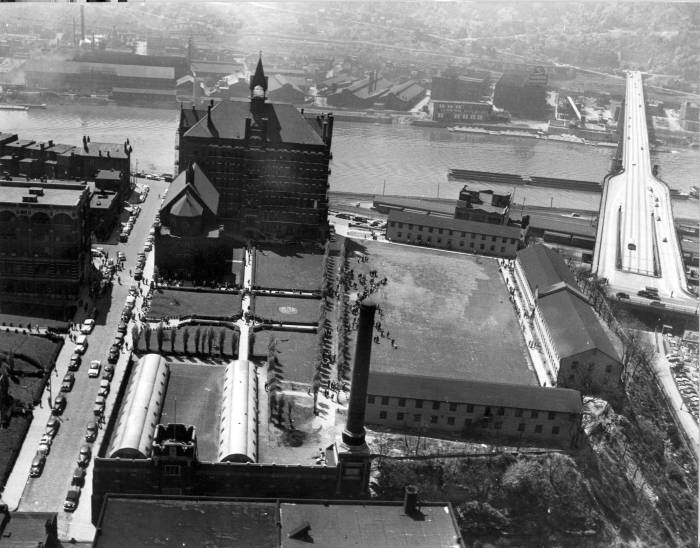 The above photograph was taken after the 1946 Lanham Act, which allotted Duquesne University three barrack buildings. Once WWII ended, the buildings were turned into classrooms and laboratories. One of these buildings, which had been used as a classroom, was moved to make room for Trinity Hall, but they remained in use until Rockwell Hall was constructed. Via Duquesne Photograph Collection.

Student Illustrations from the "Duquesne Durational" 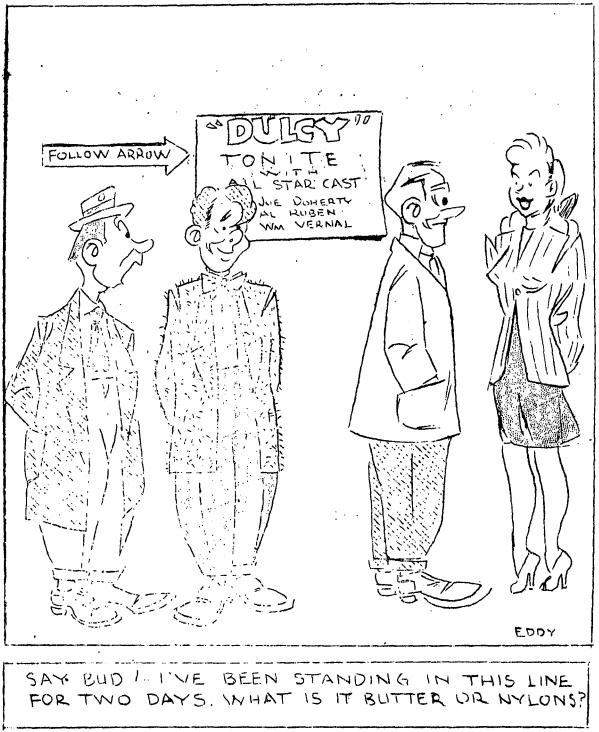 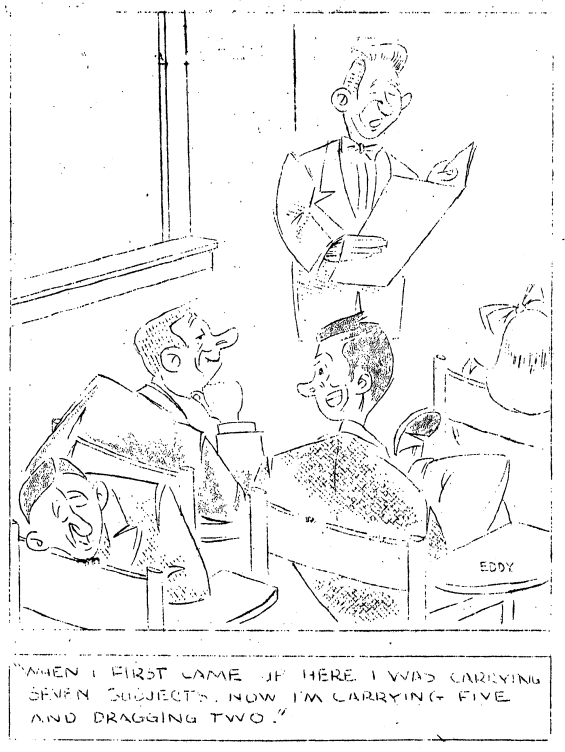 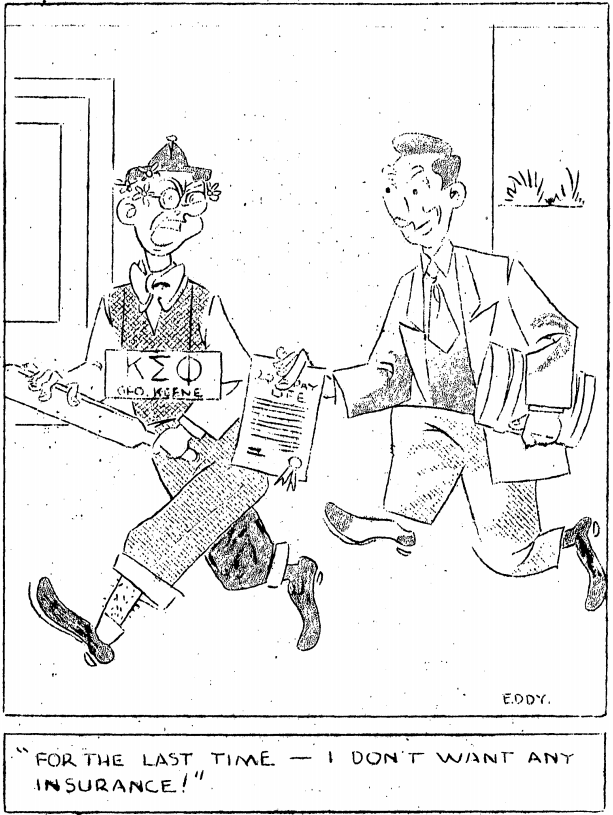 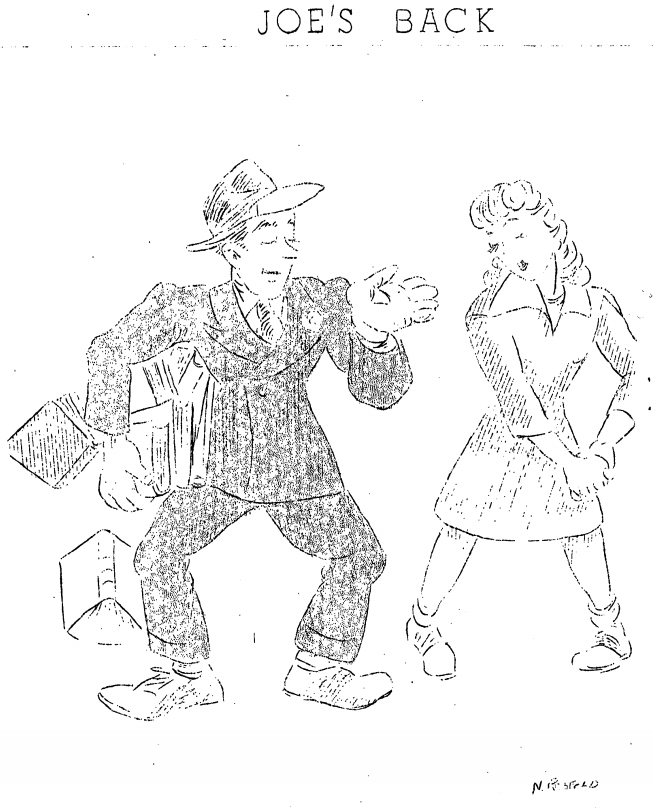 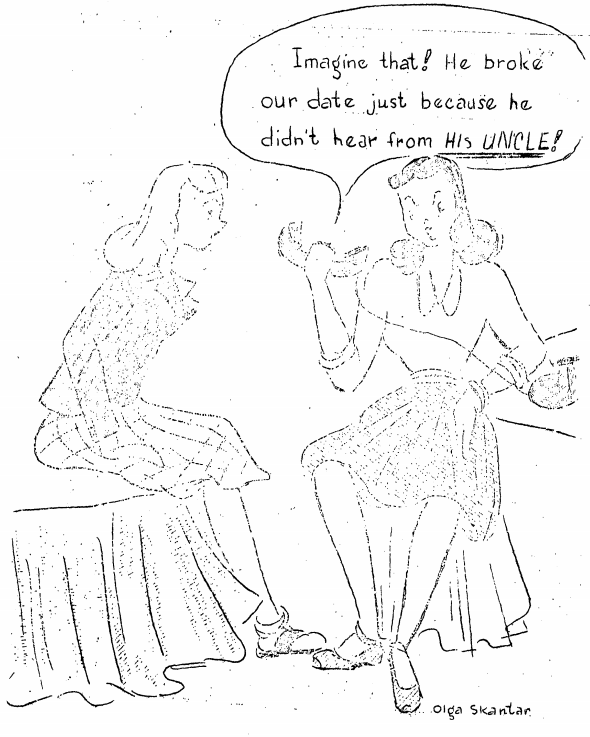 About the "Duquesne Durational"

In 1943, the publication of the "Duquesne Duke" was suspended due to wartime activities. From then until 1946, the "Duquesne Durational" was published in its stead. This publication deviated greatly from earlier student newspapers in both format and scope. Neither a literary magazine in the style of the "Holy Ghost College Bulletin" or "Pittsburg College Bulletin," nor a classic newspaper like the "Duquesne Duke," the "Durational" highlighted the effects that World War II had on campus. It managed to do so in four or fewer pages, a result of rationing and scant resources, with a staff of seven.

Topically, the "Durational" had relatively few social events to cover in accordance with declines in both student retention and enrollment due to war drafts. Dukes were particularly involved in military activities; prior to the war, faculty members and military officers cooperated to identify and enlist remarkable students for officer training, and within a year of Pearl Harbor, nearly every eligible male student went from college reservist to active duty (1944-01-14, page 1). Women, too, began to leave school, in favor of joining women auxiliary units or working in defense plants.

Many of the enlisted students had been previously involved in the development of the "Duquesne Duke," including the Editor-in-Chief, which contributed to the "Duke's" cessation. The "Durational" was published by the remaining staff of the "Duke" until 1945, when, thanks to the coordination of Dean of Men Father Edward Smith, the Sigma Tau Delta English Fraternity assumed the bulk of the production responsibilities. In the database, the issues published with Sigma Tau Delta are marked with volume numbers, while those produced prior to the union are labeled only by date.

Where there were once updates on Alumni activity, the "Duquesne Durational" published updates on the whereabouts of enlisted students, noting who returned home to visit, where they were being deployed, whether they were receiving pilot's training, and, an unfortunate outcome of their line of work, the most recent casualties.

The "Durational" was, from its conception, temporal. In May of 1946, it was announced that the "Duke" would enter back into circulation. Though they celebrated the hard work put into the publication and its necessity during wartimes, the paper's staff was "pleased to pass [it] into the limbo of forgotten things" (1946, vol. 1, no. 13).

Despite the seriousness of global and national politics, the "Duquesne Durational" maintained school spirit and optimism throughout its tenure. It acted as the center of a global community of Dukes, uniting those Dukes who were training in the military academy, on the front in Europe, and attending classes on campus.