According to the Oxford Dictionary, racism is "prejudice, discrimination, or antagonism directed against a person or people on the basis of their membership in a particular racial or ethnic group, typically one that is a minority or marginalized."

What is the White Racial Frame?

Now four centuries-old, the white racial frame encompasses not only the stereotyping, bigotry, and racist ideology emphasized in other theories of "race," but also the visual images, array of emotions, sounds of accented language, interlinking interpretations and narratives, and inclinations to discriminate that are still central to the frame’s everyday operations. Deeply imbedded in American minds and institutions, this white racial frame has for centuries functioned as a broad worldview, one essential to the routine legitimation, scripting, and maintenance of systemic racism in the United States.

Adapted from a description of the book The White Racial Frame: Centuries of Racial Framing and Counter-Framing, by Joe R. Feagin

According to the Boston University Community Service Center, "Anti-Racism is the practice of actively identifying and opposing racism. The goal of anti-racism is to actively change policies, behaviors, and beliefs that perpetuate racist ideas and actions."

This research guide was made by Hannah Goss, English Department Intern, and Ted Bergfelt, Humanities Librarian in October 2022. It is based on a guide from the University Library System at the University of Pittsburgh entitled "Anti-Black Racism: History, Ideology, and Resistance," which was created by Carrie Donovan. The Duquesne guide was made with her kind permission.

Examining your place in a racist society can be overwhelming. The chart below may help you gauge where you might be. 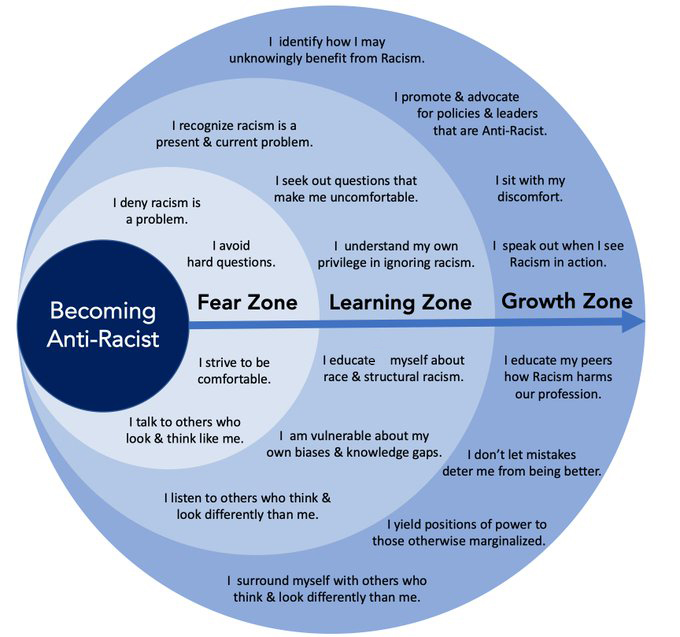 This chart was adapted by Andrew M. Ibrahim MD, MSc from “Who Do I Want to Be During COVID-19” chart (original author unknown) and is re-used from Black Life Matters: Anti-Racism Resources for Social Workers and Therapists, June 2020, https://www.socialwork.career/2020/06/anti-racism-resources-for-social-workers-and-therapists.html