Celebrating the canonization of the "Saint of the Gutters"

compassion to the poor.” 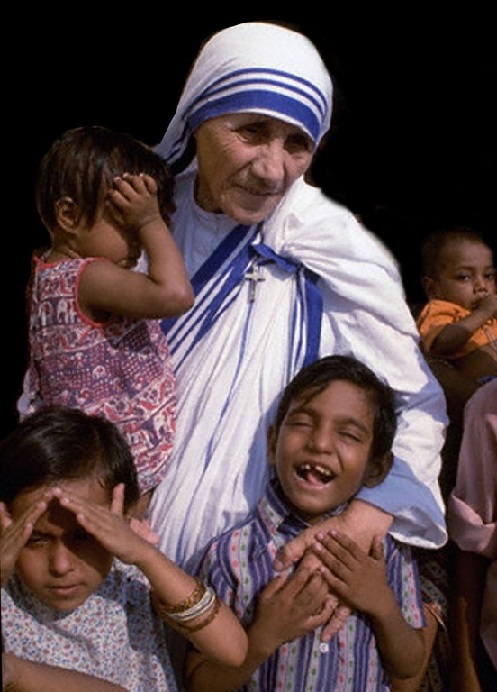 To use these databases off-campus, you will need to enter your Multipass username and password when you click on a link below.

Gumberg Library subscribes to a number of databases of electronic reference works. These cover all subject areas, and in some cases, contain hundreds of specialized encyclopedias, dictionaries and other sorts of reference works. A search for Mother Teresa's name in any of these will bring up authoritative articles on her life and works. To use these databases off-campus, you will need to enter your Multipass username and password when you click on a link below.

She was tiny in stature, but mighty in love and in her works on behalf of the poor. In 1929, Sr. Teresa came to Calcutta (Kolkata) to teach in schools of the Sisters of Loreto. While there she saw the abject poverty in which so many of the poor there lived and was moved by God to seek permission to work with them. In 1950, she founded the Missionaries of Charity and from that time came to be known as Mother Teresa. Today the Missionaries of Charity serve in over 100 countries. During her life, this "saint of the gutters," was also a voice for the poor and powerless in halls of power around the world. Though Mother Teresa died in 1997 at the age of 87, through the Missionaries of Charity, her work continues. On September 4, 2016, Pope Francis canonized Mother Teresa as the perfect exemplar of the Jubilee Year of Mercy. This research guide is designed to help the students, faculty, and staff of Duquesne University become better acquainted with this most recently canonized saint.

Officla vatican stuff from the canonization

From the Holy See & Web