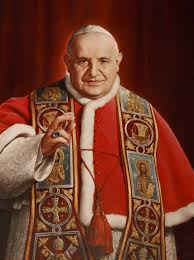 Celebrating the Canonization of

On April 27, 2014, Divine Mercy Sunday, Pope Francis canonized two of the most influential popes of modern times, John XXIII and John Paul II. Retired Pope Benedict XVI was in attendance. This day has been called the "Day of Four Popes," because it was the first time in the history of the Church that two popes were made saints in the same day, with two living popes taking part in the mass and ceremony.

Pope John XXIII was the main architect of the Second Vatican Council and the wide-ranging changes in all aspects of the Church that it brought about. Pope John Paul II was the most-traveled pope in history as he sought to bring the Gospel to the far-corners of the world. The first Polish pope, he also played an important role in the fall of the Soviet Union.

This research guide is designed to help Duquesne University students, faculty, and staff learn more about these two remarkable men.  If you are off-campus, when you click on some of the links you will be asked to enter your Multipass username and password in order to see the content.

"Canonization of Saints (History and Procedure)", from the New Catholic Encyclopedia, 2nd edition

"Saints and Beati", from the New Catholic Encyclopedia, 2nd edition 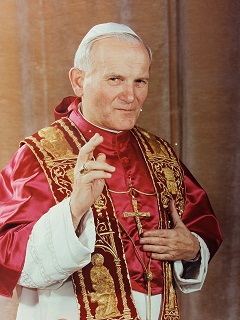 Click the button above to visit the CRRA website, home of the Catholic Portal, a catalog of rare, unique, and uncommon Catholic scholarly materials in the library collections of the 40 member institutions of the CRRA. An ever-growing number of the items listed may contain links to the full-text!